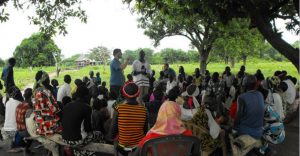 Who are the Gideons ?

South Sudan as a country has a majority Christian population, whereas the Dinka are only 14% Christian, with 86% practicing animism.

The country as a whole has a literacy rate of only 27%.

South Sudan is the world’s newest country (2012), after years of conflict from north Sudan.

Despite their newly founded independence fighting renewed in December 2013 among the country’s factions. Placing the country in a global food crisis, tens of thousands of people have died and about 3.8 million South Sudanese have been driven from their homes.

Pray for a peaceful ending to the numerous conflicts taking place in the
country.

Pray for the equipping of leaders in the Church as they seek to minister in a difficult context.

Pray for the families scattered abroad the world as they adjust to new countries.

Pray that despite conflict and crisis, they will receive the gospel and believe.