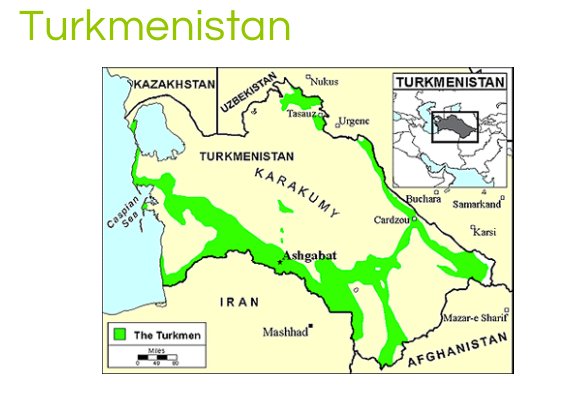 Some facts about Turkmenistan :

The culture has been strongly influenced by Turks, Arabs, and Russians. For centuries they were nomadic herdsmen, but have had their culture changed in the past 70 years due to Soviet influence.

Tribal loyalties still hold a strong influence over the people.

The Soviets wanted to eradicate Islam from the people and violently persecuted Muslims.

Today there is outward conformity to Islam, but the actual beliefs include many forms of mysticism.

Constitutionally there is freedom of religion, but in practice there is limited freedom.

Pray that God would raise up strong, bold
Turkmen believers that will preach the Gospel without fearing for their lives.

Pray that persecution will bring unity and stronger faith to the Turkmen Christians.

Ask the Lord to call people who are willing to live among the Turkmen and share with them the love of Christ.

Pray that Christian radio broadcasts and literature will be made available to the Turkmen.